The Epilepsy & Society Symposium was held yesterday (July 1st) in Bali, alongside the 12th Asian and Oceanian Epilepsy Congress.

Dr Anna Sinardja spoke about epilepsy and stigma; telling how epilepsy is called ‘dead goat’ and ‘crazy pig’ in some regions.
Traditional healers are still used extensively in the region, with epilepsy being considered by them to be caused by spirits or by body temperatures that are too low or too high.
The norm is for a person with seizures to attend a traditional healer for four years before going to medical doctor. A medical doctor who lives with epilepsy explained that even she went to a traditional healer at first, due to family pressure. 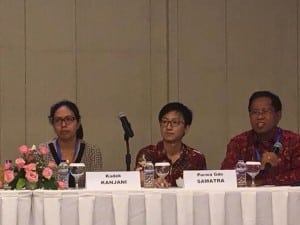 Dr Tsai, from Taiwan, poses a question to the speakers panel.

A panel of speakers from Indonesia reported on living with epilepsy in Indonesia, discussing various topics – stigma, pregnancy, traditional medicine.

Prof Simon Harvey, Australia, described how the psychosocial problems faced by children with epilepsy can be more difficult to deal with than the seizures themselves.

Prof Patrick Kwan, Australia, spoke about epilepsy in the elderly and reported on the need to involve the patient in decisions in the treatment and care. 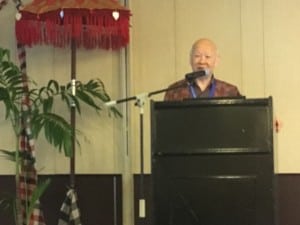