An initiative of the European Federation of Neurological Associations

For almost 10 years, Gay Mitchell has been a consistent and dedicated campaigner for people with epilepsy in Europe, following many years providing similar support at national level in Ireland.

Gay Mitchell first became involved in the work of IBE when he was asked to present at European Epilepsy & Society Congresses. At these meetings he gave insight on how the EU worked and on how national associations could make best use of the parliament. 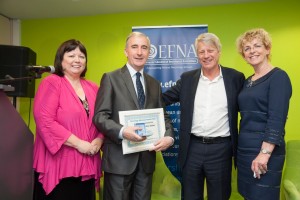 In late 2010, during a conversation on the plans of IBE to create a European Epilepsy Day, Mr Mitchell offered to host an event in the EU Parliament to celebrate the first European Epilepsy Day. In February 2011, with amazing support from him and his assistants, a lunch event with almost 30 MEPs present was followed by an Evening Reception where a further 70+ MEPs were present. The success of both of these celebrations was due in large part to Mr Mitchell.

At the launch of European Epilepsy Day, Mr Mitchell suggested creating an ad hoc group of MEPs to support epilepsy in the parliament and this was the start of our European Advocates for Epilepsy Group, which had almost 50 members by the end of the parliamentary term.

As President of the European Advocates for Epilepsy Group, Mr Mitchell and five other members, submitted a Written Declaration on Epilepsy, which was approved in September 2011, carrying the signatures of 459 MEPs, one of the highest ever number of signatories for a declaration. While the declaration is not a legally binding document, it is now used extensively by IBE member associations in Europe as a tool to approach national governments and our members have reported on successes achieved as a consequence – e.g. the provision of premises by the government in Sofia for an epilepsy centre.

In 2012, 2013 and 2014, Mr Mitchell hosted an annual event in the parliament for subsequent European Epilepsy Days, and hosted a number of workshops highlighting various issues associated with epilepsy, in addition to regular meetings of the MEPs group. He also arranged a number of meetings between representatives of IBE and our medical counterpart, International League Against Epilepsy, and the Health and Research Commissioners.

Epilepsy is the third most common neurological condition in the EU, after Alzheimer and Stroke. Yet, despite this statistic, when the first European Epilepsy Day was launched in 2011, European Union FP7 research funding for epilepsy stood at a mere €30 million for the period 2007 – 2013. This is in contrast to the figure for total European Health costs associated with epilepsy, which had been estimated at €15.5 billion.

Mr Mitchell played a major role in raising awareness for epilepsy and thanks to this exposure that epilepsy received since 2010 , research on epilepsy was defined as a priority in the last Framework Programme 7 ‘Health’ Call for proposals published on 10 July 2012.

This led to further funding for epilepsy related projects to the amount of €36 million in the final call for the EU 7th Framework Programme. Gay Mitchell opened doors for us in Europe and provided direction, which have been instrumental in raising epilepsy on the political agenda. For this dedication, he received an IBE/ILAE Ambassador for Epilepsy Award in 2013.

On his retirement from politics last year, Mr Mitchell agreed to become a member of the IBE/ILAE joint task force on epilepsy in Europe – Epilepsy Advocacy Europe – which is the group that coordinates the IBE EU-related activities clearly demonstrating that his support to the cause of epilepsy was never associated with political gain.