Caritas Malta Epilepsy Association was set up in 1996 and is run completely by volunteer workers.  Our mission statement is “a better life for people with epilepsy in Malta.“ We provide free training sessions in many different venues to promote increasing local awareness about epilepsy and to reduce stigma. There are about 300 members on our mailing list who receive regular informative newsletters and the public is invited to a bi-monthly support group meeting.  There are also social events designed to encourage interaction and foster community. 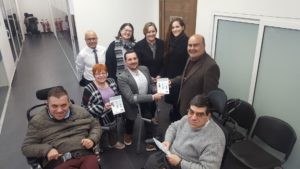 Presenting copies of our new Epilepsy Toolkit (available in English and Maltese) to Mr Oliver Scicluna, Commissioner for the Rights of People with Disabilities in Malta and members of the Commission, B’Kara Malta; February 2019

Recently Caritas Malta Epilepsy Association (CMEA) has launched an epilepsy toolkit in English and Maltese in conjunction with International Epilepsy Day on 11 February 2019, which is celebrated worldwide on the second Monday in February. The toolkit was funded by PEKTUR, a funding scheme by the Commissioner for the Promotion of the Rights for Persons with Disability (CRPD). Mr Frank Portelli, President of CMEA presented a copy of the toolkit to Mr Oliver Scicluna, Commissioner CPRD. In his presentation, Mr Portelli explained how epilepsy is the most common neurological brain disorder, caused by abnormal excessive electric discharges. It affects over 1% of population worldwide and over 4000 persons in Malta and Gozo. Many advances have been made on its causes and several new medicines are now available which control seizures in over 70% of cases. Yet, in several countries, including some European countries, persons with epilepsy still face social exclusion and discrimination. This adversely affects employment and education of persons with this condition. Over the last two decades, CMEA, which was set up by voluntary workers in 1996 and now lists almost 300 members, has been working hard to promote more local awareness about epilepsy. This toolkit is intended to provide basic information on the condition to the public and it also provides information which will help persons with epilepsy be better equipped to have a better quality of life. It is intended to complement the medical advice and instructions given by the medical professionals. The toolkit will be used by CMEA to supplement their outreach activities and training programmes to various stakeholders such as parents, employers, police officers, care workers and educators.

We are also currently working towards bringing buccal midazolam to Malta as it is not yet available here.  This rescue medication that can be administered orally rather than rectally would be of great benefit to both people with epilepsy and their caregivers.  This has actually been on our agenda since as early as 2006 but efforts have increased as of late and progress is being made in this area.  This would also facilitate rescue medications being available to people with epilepsy in the school system.  In 2019 meetings have already been held with the Prime Minister, the Minister of Health and Minister for Social Solidarity. 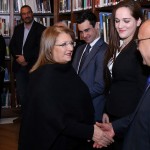 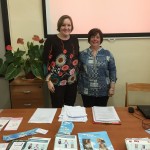 Two of our committee members, Ms Robin Pinkston and Ms Caroline Attard training guidance counsellors and Assistant Heads of a College of Schools in Malta, March 2019