Community Development and Epilepsy Foundation (CODEF), in Cameroon, was founded in 2002 by Nsom Kenneth Ninying, – community health nurse, whose relatives have epilepsy. His maternal uncle had five children, three of whom were tragically killed in a fire due to epilepsy. His school guardian had a son called Ephesians who had epilepsy and died by drowning in a stream. Kenneth has two nieces who each have a child with epilepsy, while his cousin also has a daughter with epilepsy.

On several occasions Kenneth has witnessed negative behaviour perpetrated against persons with epilepsy undergoing seizures. For instance, Kenneth came upon a scene one day where a girl had a seizure inside a car. The driver pulled her out of the car, beat her and abandoned her unconscious on the road. Nobody in the car protested. The driver continued to insult the girl saying “Who is this wizard that wants to bewitch my work for the day?”

After observing such improper treatment and preventable injustices, Kenneth called a meeting for persons with epilepsy, persons living with HIV/AIDS, women/girls, health personnel and sympathisers. This meeting resulted in the formation of CODEF to fight against epilepsy and HIV/AIDS and its social injustices. Its mission is to improve the health, human rights, socio-cultural and economic status of persons with epilepsy in Cameroon.

CODEF’s aims/objectives are to identify, educate and sensitise communities on epilepsy, HIV/AIDS and disabilities (awareness raising) and to carry out home visits. This is to reduce, prevent and combat stigmatisation, social isolation, abandonment and the discrimination of persons with epilepsy, HIV/AIDS and disabilities. Cameroon law No: 2010/002 of 13th April 2010 section 3:3 approves epilepsy as a form of disability.

Additionally, CODEF lobbies and advocates for the rights of persons with epilepsy, HIV/AIDS, disabilities and violence prevention on women/girls. This is to empower these persons on their human rights, and to build their capacities to be advocates and ambassadors their conditions.

CODEF also carries out research on the causes and prevention of epilepsy, supports epilepsy victims and their families (carers) through income generation activities, health education, forming community epilepsy support groups, and mobile epilepsy clinics. This will address low self-esteem, build self-confidence and assist in contributing to the development of their communities. 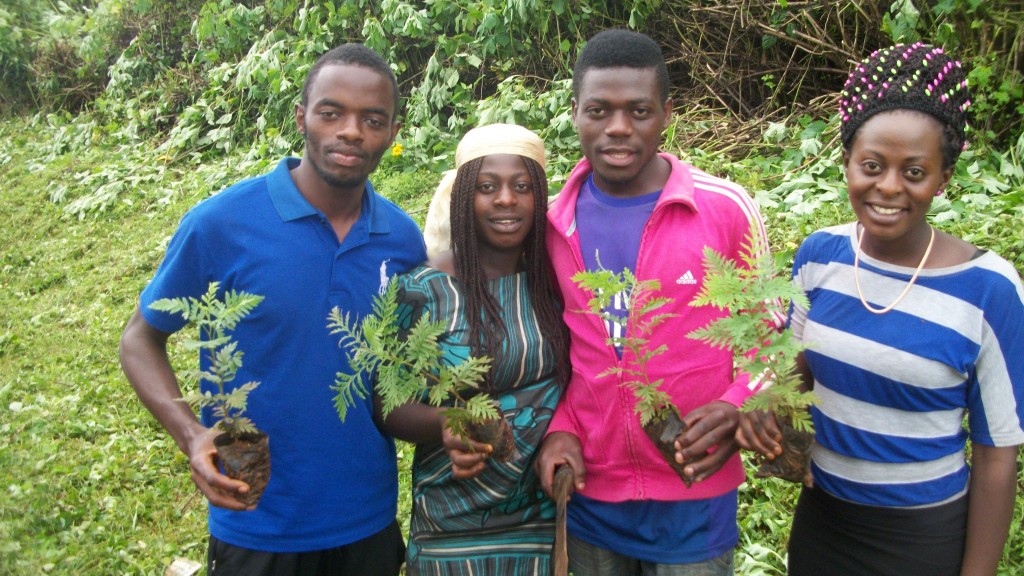 Michael Che Kpuh’s son had epilepsy and was attending a secondary school in Wum in North West Cameroon. He was stigmatised, socially isolated and discriminated upon by his peers, teachers and the school management. During his seizures he became incontinent. His classmates called him names such as evil spirit, witch and fool. His teachers kept him seated alone on a bench and in one corner of the classroom during school hours. He was demoralised and had low self-esteem.

His epilepsy condition and the issues of incontinence became worse despite taking epilepsy medication. His parents took him back to the hospital but to no avail. School authorities called his father for an administrative council meeting because they had taken a decision to dismiss the boy from school. His father had pleaded that his son should not be dismissed but the school authorities insisted on his son’s dismissal.

The family were confused about what to do. They had spent a lot of money on their son’s treatment since childhood. With his small pension the father could no longer care for their son, his other siblings and provide food.

When his parents learned of CODEF out-reach activities in Wum District hospital in 2015, from the American Peace Corps Volunteers working with CODEF and other projects in Wum; they decided to meet CODEF to present their family ordeal.

CODEF immediately intervened by visiting the school authorities and held several meetings with the school management, stressing that it is the right of a child to receive schooling and be educated despite health conditions. The school management gave his parents and CODEF one condition – in order for them not to dismiss his son; the parents would have to provide him with sanitary protection.

In addition, in collaboration with the hospital doctors, CODEF increased his medication to a higher dose and followed-up on his compliance. To everyone’s amazement, this led to a huge improvement and an end to his incontinence.

Today the young man has been appointed a flag boy at the school school – by the same school authorities that were to dismiss him! His duty is to hoist the school flag every morning during assembly and to bring it down in the afternoon when the school is closing.

The father has decided to champion epilepsy by educating his community in the markets or at bus stops, at the Village Development Associations (VDAs) and other social groups.

CODEF’s mobile epilepsy clinics are out-reach epilepsy activities where groups of people with epilepsy visit health institutions each week to collect anti-epileptic drugs. CODEF created a mobile epilepsy clinic in Wum District Hospital in Menchum Division which where the group was meeting once a month. Hospital management offered CODEF a free room for use during the clinics. When people with epilepsy attend the clinic CODEF staff carry out epilepsy health education, raising awareness of the importance of taking anti-seizure medications as prescribed – taking them at the right time and in the right dose. 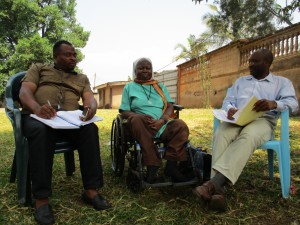 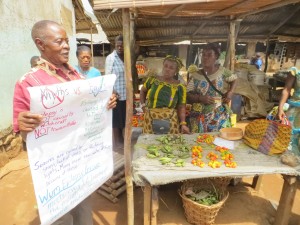