The European Federation of Neurological Associations (EFNA) recently held the second annual Neurology Advocacy Awards. The awards recognise the contribution of an individual or group to the development and promotion of advocacy for people with neurological disorders in Europe.

This year’s winners were presented with their awards at a Gala Dinner in Dublin on October 13.

The winning European Policy-Maker for 2016 was Marian Harkin MEP, a prominent member of the European Advocates for Epilepsy. She was nominated for the award, jointly, by the International Bureau for Epilepsy and Pain Alliance Europe. 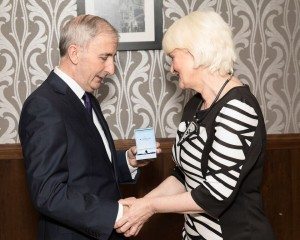 Marian is currently a co-chair of the MEP Interest Group on Brain, Mind and Pain – but has been long-term champion of health issues in the European Parliament.
She was presented with her award by last year’s winner – Gay Mitchell, former MEP.