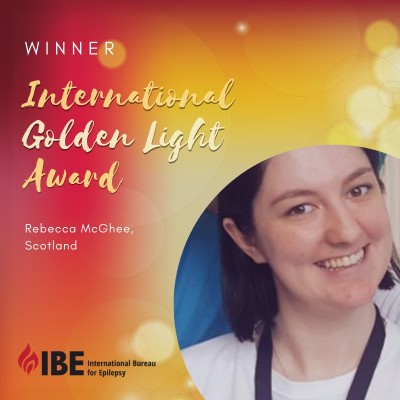 I’m not going to lie, I’m not happy about having epilepsy. I can’t drive or stay up too late and I have to get up at 8am to take my tablets and have breakfast (even on the weekend) plus it also makes finding a job a lot harder.

But as rubbish as those things are, there are also many things that if I didn’t have epilepsy I would have missed out on. I wouldn’t have worked with epilepsy charities promoting epilepsy awareness or taking part in fundraisers. Epilepsy has given me a number of opportunities to help and support other people who are living with the condition and to help spread epilepsy awareness. I have lots of seizure types, tonic clonic, partial and absences and living with epilepsy has made some things challenging for me. I’ve had loads of injuries, including broken bones, cuts and bruises, broken teeth and even a ruptured spleen! I’m a regular at our local emergency department and have visited many more when I’ve had a seizure away from home, but I don’t and won’t let it stop me doing things. I just make every situation as safe as it can be for me and want others with the condition to be confident in doing the things they want to do too.

I believe it is important to spread awareness and teach people about epilepsy as there are so many people who make assumptions through lack of knowledge. I’d like more people to understand that epilepsy is actually quite common, to know what it involves and to realise that it although is a very complex condition those that have it are just ordinary people. I think that people should be taught from a young age what to do if they see someone having a seizure, not to panic, not to be scared and seizure safety and epilepsy awareness should be included in first aid courses.

I had my first seizure, a tonic clonic seizure, nine years ago when I was thirteen years old. I wasn’t diagnosed until a year later and at that time there were no local support groups for young people and epilepsy wasn’t very well known by any of the people I came across on a daily basis. At school we could have done with a lot more epilepsy awareness, people didn’t understand what epilepsy was and why I didn’t fall to the floor around any sign of a flickering light, my epilepsy isn’t photosensitive yet despite me telling people this they always wanted to keep me away from flashing lights. People would avoid me because they were scared I’d have a seizure. My diagnosis would have been made much easier to cope with if there had been a support group for young people in my area, so I would have been able to make friends with other people around the same age as me and talk about what it was like living with epilepsy, sharing our stories and experiences.

My experience of a diagnosis without any peer support from people my age, going through the same things, experiencing the same problems and difficulties was hard. It would have been a lot easier if I had these things. So; I worked with Epilepsy Connections to help to start a ‘Young Adults Support Group’. Since the first Support Group meeting a number of people have joined the group and we are all very supportive of each other. We have an online support group where we keep in touch most days, sharing what we’re going through, the highs and lows and cheering each other up when one of us has a bad day. We meet monthly for pizza, chat and support from our Epilepsy Connections Fieldworker, Ewan. We access other activities through Epilepsy Connections too including opportunities to volunteer at events across the country. We are determined not to let epilepsy stop us and have taken part in the Tartan Warrior OCR (obstacle course running) event three times and are looking forward to taking part again in October. We marshal and run the OCR course, spreading epilepsy awareness, telling people about Epilepsy Connections and fundraising for the charity all at the same time.

I also blog about my epilepsy and have even volunteered to be part of a film project about epilepsy, after all the more people know about epilepsy the better able they will be to help if they see someone like me have a seizure.

I found my diagnosis hard to come to terms with and feel that had there been any support groups similar to ours at the time of my diagnosis learning how to accept it and cope with the diagnosis, the change in lifestyle and learning how to live with epilepsy on a daily basis would have been much easier.