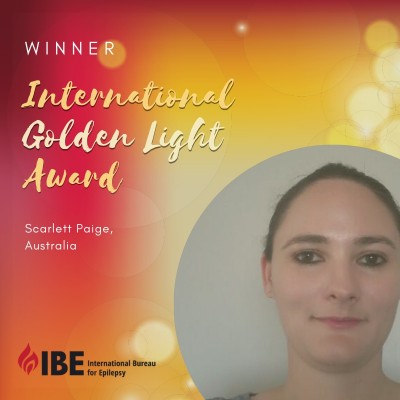 My epilepsy journey started in January 2006. I was 18 and had the next 2 years of my life planned out I was about to embark on my life long dream to be an au pair in the United States of America. I was on the way to gaining my licence and had a job working in early education saving up for my trip.

Standing in supermarket with my mother without warning a complex partial seizure. I have no recognition of this. With my GP having no explanation of what had happened the (seizure ) was dismissed. 6 months of increasingly worsening complex partials still with no diagnosis – that’s when the tonic colonics reared their head.

After three nocturnal tonic clinics I was taken to the Royal Hobart Hospital and diagnosed with epilepsy by Neurologist and Epileptologist Professor Mark Cook.

Initially I was thrilled with this diagnosis and was put on medication to control the seizures. They worked for a while, but the complex partials came back.

This is when the depression hit a realisation of not being able to hold a licence meant I could no longer travel to the US to be an au pair. I lost countless friends and my family and I had to adapt to a new way of life.

To help us through this we turned Epilepsy Tasmania. Here we got the support needed in the early days and months to understand epilepsy and how you can continue with your life. I attended monthly support groups and camps annually.

In 2008 underwent neurosurgery at St Vincent’s Hospital Melbourne. This is where the Epilepsy Foundation of Victoria first made contact with my family and I.

I became a regular on their adult and women’s getway weekends flying over from Tasmania to attend these.

By this time my epilepsy was under control and I finally made it to the US to be a leader at a summer camp. I had returned to work in early education and gained a diploma Early Education and Care.

I always remembered the help and support the Foundation gave me and decided return what I had received. My Mother and I took up the running of the Hobart epilepsy support group that ran every month for two years – this brought people from all over Southern Tasmania together. We provided lunch, a safe environment and somewhere where epilepsy was normalised. We shared birthdays, joy, laughter and it time tears for those left us along the way.

During my time volunteering in Hobart I decided to put my name down to volunteer on an adult getaway in Victoria.

This saw the start of what I would call A Love Affair for volunteering on weekend getaways. At every opportunity, I put my hand up and flew to Melbourne to volunteer on adult, family and women’s network getaways. The joy of seeing people being able to let their guard down and relax in this safe environment is one of the most rewarding things I have been a part of.

In 2015 I moved to Victoria where I became a volunteer co leader the adults with epilepsy support group and the women’s epilepsy network. This role saw me organise regular outings in and around Victoria for people living all types of epilepsy. We arranged activities, day trips and evening meals. Everyday normal stuff, except for people with epilepsy this everyday normal stuff comes with the interruption of seizures. Being an inclusive support group means that if a seizure pops up a leader is there to help and everybody around doesn’t stop and stare.

Being volunteer has been one of the most enjoyable things I have done. It has seen many highs and some very sad lows. But knowing when you hear the diagnosis Epilepsy you are not alone and there are those to support you every step of the way makes the road less rough.